I SURVIVED! Last night was a bit crazy. The weather held off until 9pm but then opened the gates of hell. Precisely at 9pm, I started hearing rain hitting my tent. With my eyes closed, I could see lightnings going off like a strobe light. The storm was coming alright. Loud thunder cracked in the air so loud it felt as it the ground shook. It only happened a few times, thank goodness. Around midnight, that’s when the strong winds showed up to the party. Lightning, winds and rain continued until the weee hours. Thunder was just a grumble away and was not disruptive to my night of sleep. Joey yelled out at me asking if I were alright. He, on the other hand, had water in his tent. I did woke a few times freaking out that the rain would find its way into my tent but it did not. I woke this morning with a dry sleeping bag and tent. YES! a dry tent! The wind persisted while the rain stopped, drying my tent by morning. It was a scary, yet great night!

We walked about 8.5 miles on the road before we finally made it to Econfina WMA. Thanks gosh for a wooded trail. It was a fairly windy day and being exposed on the road was no fun. We stopped at a Dollar Store of the trail to get Joey some resupply item. I bought a half gallon of chocolate milk and cookies for breakfast…  Because why the heck not? I shared the milk with Joey, don’t worry. I couldn’t even finish my half of the half gallon before I was all chocolate milk out. We sat on the side of the store, away from patrons as we ate and Joey repackaged his food to be more portable.

Two dogs, came from the road to us, one very skittish and another who appeared to be friendly. I dropped some crackers thinking they may had been hungry but they didn’t touch it. The little one, who still had the puppy playfulness came right to me tail wagging and all. The black one was so scared but was interested. After he got closer I petted him and he was happy about that. Nothing like a good old chin scratch. The cashier told us they are “regulars”. They probably live nearby and roam around. Scary thought as there was 1 busy highway nearby.

Still at the dollar store after the dogs had left, a woman pulled out and u-turned back in the parking lot to come our way. Great… What was it now? We were tuck on the side so people couldn’t really be bothered by us. She opened her window and told us she had something for us. Something for us?!? I walked towards her and she handed me a card, with a religious saying on front and a “god bless you” not inside along with $10. I refused, smiled and told her we didn’t need it. She insisted and before I could say what we were doing she replied that someone just had given her that out of the store and she also didn’t need it so she was paying it forward. Again, I refused but she insisted. I thanked her, and she drove away. I turned around and paid it forward to Joey! Ha. Do we look that bad like hobos? Floridian (that’s their name right?!) don’t know about the trail and basically think people with backpacks must be homeless folks.

The last few miles on the road had another encounter with dogs… This time not so friendly. They came bolting towards us from their house and barking aggressively. I was worried, they were far too fast and barky to be just warning us that I readied my trekking poles and yelled NO! Their owner was outside and yelled out that they weren’t mean… I wasn’t too sure about that!

The afternoon in the woods was a breeze. Literally, it was breezy. Sun peaked out of the clouds once in a while but didn’t stay out to long. It was a cool day for hiking. The trail was well maintained and yes there was debris on it. We assumed it had been due to the storm the previous night. There was a lot of little bridges to keep our feet out of wet areas. YAY! Thanks whoever maintains this section! There was 2 suspension bridges and they were neat! 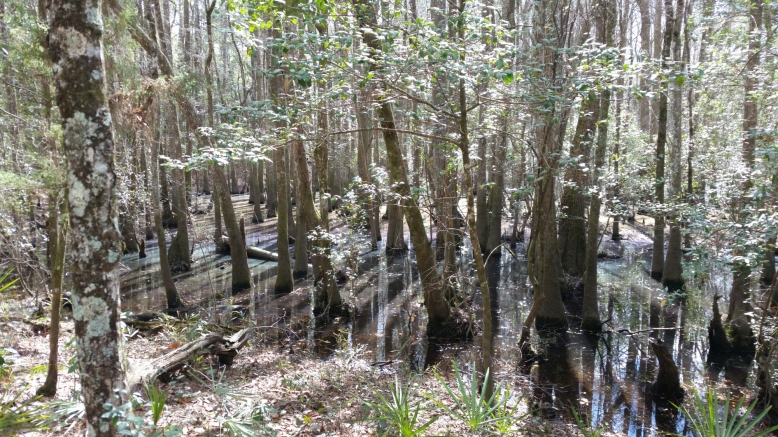 Saw my first rainbow swamp today. I can’t remember what it means, dang it!! But it’s definitely not oil on the surface. Neat right?!  Too bad I didn’t have a better camera to capture it.

We walked to the campsite and saw 2 potta-potties and picnic tables. Awww yisss! Tonight was going to be awesome. It is still pretty windy and temps have dropped so here I am back in my sleeping bag early in the night and ready to get a good night of sleep. Last night kept me up a bit for obvious reasons. I love storms in the comfort of my house… In my tent while there’s tornado watches? Not so much.

We're having a hoot! We've got a pair of great horned owls living our backyard. 🦉
"Staying home" for nomadic people can be difficult but we found a way. We decided to self isolate at an RV park in New Mexico. For us, driving across the country, didn't make sense as we would expose ourselves (and others) each time we'd have to go to town to resupply. Sewer, water and electricity is all taken care of here so all we needed was supplies to shelter in place long-term. We foresee a lot of backpacking dinners in our future. Be sure to wash your hands and help us flatten the curve!
And just like that, we entered yet another chapter on our travels! 🥳 Our tiny home on wheels - the van - has been wonderful for the past few years. Originally, it was a very practical tow vehicle turned weekend adventure vehicle and eventually our full-time tiny home on wheels! It has a tiny fridge, a small desk, a portable toilet, a bed and BONUS: it has a kick-ass solar capabilities to keep us powered up to maintain with our remote jobs Monday through Friday. Sky came into our lives and the van started to feel a tad cramped. We had been planning to buy a larger Ford Transit van and rebuild a whole new van that would allow Bryan to finally stand and move around. After designing several layouts, something was missing… Space still seemed small so we decided to combine our love of the mobility of the van with the space 'luxury' of our old travel trailer had and together the idea of a Class C RV came along. So here it is!! Our new tiny home on wheels! It's a 24ft RV that is built on a Ford E-350 chassis. This was the perfect combination, for us, that merged mobility and space luxury. (AND THERE'S A FULL BATHROOM IN HERE!) 😲 This will make social distancing easier and even more of a comfortable living space for us. Despite all the uncertainties in the world right now, don't forget to enjoy the littlest of things while at home. Learn a new skill, do something kind for a neighbor, spend time with the kids and/or the fur kids and don't forget to wash your hands! 😂🥰
%d bloggers like this: