After the trail magic I’ve received on the Florida Trail, I knew I wanted to give back to the community. I had a very teenie tiny chance to do some when I was on the Colorado Trail but I wanted to do more. So this past weekend, I loaded up the SUV with water and high calorie snacks and headed to Freeman Rd Trailhead on the Arizona Trail, near Florence. It was about a 2 hour drive from Phoenix so all things considered, it was pretty close.

I was unsure how it would turn out since according to this year’s roster on the Facebook AZT class, most thru-hikers were starting mid-march. I knew a few hikers were already on the trail and this was my only free weekend to pay it forward. I got to the Arizona/Grand Enchantment Trail trailhead at 730am on Saturday. Without knowing how many hikers would be passing by, I only purchased a case of soda, cookies, honey buns, mini pies, and offered sandwiches. I had brought 8 gallons of water with me in case the cache would be low but it had been recently restocked (Thanks to the AZT association!). According to the trail register at Freeman RD Trailhead, there was 3 hikers that hiked by on Friday and 2 on Thursday and it was a mix of GET’er and AZT’er.

I was pretty excited about offering my first trail magic…

When I got to the trailhead and started setting up, I saw a tent in the distance. I was willing to help hikers but not willing to stalk them to offer trail magic, THAT would of been creepy. I did not have anyone pass by until 1030am. Lorna, from Spokane WA was finishing her long sections hike of the AZT this year. 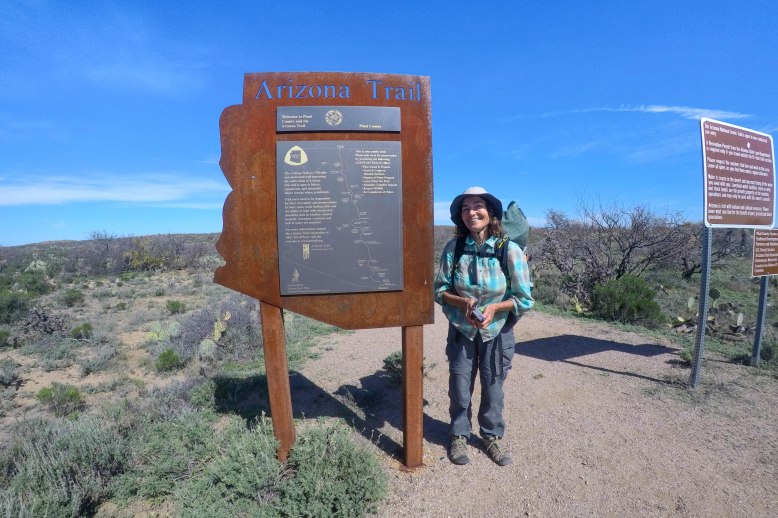 Lorna, was the only thru-hiker to hike by that day.

I did not see another hiker until 4pm.  I did see other people at the trailhead such as Jehovas Witnesses (who came and preached to me), ATV’ers and local ranchers on their horses.

I have a few friends that will be starting the GET soon or have already started it. I’m hoping to be able to help them out if I can at one point or another. It’s always nice to catch up with thru-hikers as they have the ‘thru-hiking’ glow and you can tell they are meant to be on the trail. I miss that feeling, I sure hope to get to do it again soon! For now, we’ll settle for section hiking the Arizona Trail until we head back to the Midwest in late Spring.

2 thoughts on “Trail ‘Angeling’ on the Arizona Trail.”